The downside of constant updates

Hi,
I’m a big fan of my MC8, the company who made it and especially the support you get. The firmware is still constantly updated and the devs listen to the users what enhancements should be implemented. However there is a downside to it. Programming the device gets increasingly difficult, because of the growing complexity. I was always confident to recommend a Morningstar product to anyone who is looking for a powerful midi controller that’s capabel of managing about anything you can think of regarding midi.
But given the increasing complexity of the device I’m now hesitant to recommend it to people who are new to midi programming.
The main problem in my opinion is the ui of the editor, which is a bit convoluted. A possible solution might be to implement something like a basic mode, which only shows options for the most common midi messages and device commands. If needed one should be able to switch to an advanced mode, which is basically the current version of the editor.

Having a basic vs advanced mode is a great idea. Addressing the regular updates, there’s a consistent public live version (current v3.9.7 for MC8) which is static. The regular updates are to the public BETA which is are optional updates, unless you want or need the newer functionality.

That’s true, but there won’t be any bugfixes for that version, so if you have trouble with the current alpha you are forced to use the beta or at least to switch to the new version once it comes out of beta. Since this is an ongoing process, which in itself is a good thing, one has to update the device constantly. This could be annoying, especially if the update requires you to reprogramm your patches.

I’m not sure if I can relate to what you experience. I got the MC8 as an almost MIDI newbie, having done nothing before than sending PC messages with a simple controller, where the only thing I had to adjust was the MIDI channel (Tech21 Midi Mongoose). I found the desktop editor from the start very accessible. I saw this huge list of message types and wondered if I‘d ever master this thing. But hey, I just started to pick from the list what I knew, a simple PC message and my rig was up and running like before.

So I think in my experience the MCs are fairly easy to use for beginners too and slowly adding more and more message types was fun. When the experimenting messed up the functionality of a preset you‘d just remove the messages again. But I agree that diving deeper into it takes time but in my experience almost always gets working results that are useful and fun (like setting up a home page and bank jump to specific places).

I think the desktop editor combined with the big display on the unit is key for the easy programming of the MCs, I don‘t know if there‘s any easier to use product in the realm of the more capable midi controllers?

I’m would agree to that personally, but I could point at several threads on this board that would prove us wrong. There are several people who are obviously struggeling with pretty basic stuff. I don’t believe, that the editor is badly implementet, I just think it could be improved, to help those people getting done what they wanted to accomplish.

Thanks for the feedback. I don’t know if we have the capacity to maintain a “simple” version of the editor yet. A simple version might be too restricting that users just end up using the other version anyway, because the features that one considers simple will vary, and there is no catch all.

What we’ll do is perhaps better inform the users of how to use the editor, because most people don’t read the manual. We are working on a “joyride tour”. Here’s an example: 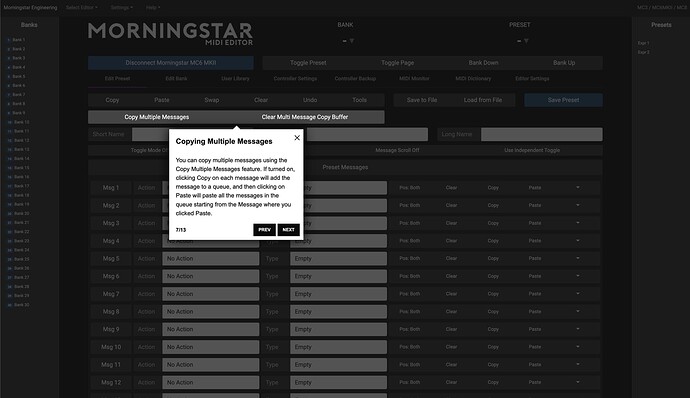 You can always stay on a version you fell comfortable with.

My be they could do something like node.js having a lts version, a stable version which is being updated only with bug squeeze. One for each major, or what ever version would be suitable.

I’m a software developer myself so feel quite comfortable the whole thing, the desktop editor and all, which by the way is excellent.

I quit enjoy seeing that there is constant updates in opposite to many other companies who just put a product out and barely update the software to squeeze bugs even.