Am I correct in concluding that the only way to change banks in Strymon Timeline (and I assume, "Big Sky’) is by scrolling? I could program a switch to scroll up (and one to scroll down), but it would be a much cleaner process if I could just enter a bank CC# to jump to a specific bank and then to a preset.

I believe pc# messages are the key here.

Thank you , and yes, one would think so, but there doesn’t appear to be a CC or PC number for “jump to bank x” min- max value. Instead, the cc numbers for foot switches A and B need to be entered in press and relase positions (0 and 127) to scroll up, and B and C the same to scroll down.

And the term “bank” is deceptive because Strymon also uses the term “midi patch bank.” This nomenclature had me chasing my tail until I realized there are actually only two “banks,” (labeled “0” and “1”) but there are 50 “midi patch banks” in each “bank.” “Bank” 0" contains 100 discrete factory presets, and these discrete presets are stored in A and B sets of two in “Midi Patch Banks.” For some yet to be discovered, but heretofore inexplicable reason, Strymon advertises the Timeline as having 200 presets, but the Timeline manual states that there are only 100 presets, and they are duplicated in the second “bank” or second series of “Midi Patch Banks:”

Anyway, once I managed to distinguish between the “bank” and “midi bank patch” I discovered I really don’t need a PC or CC message to jump to a bank. Just entering the preset number will take me to the preset and bank.

I appreciate the response and typed all the above as a bread crumb for those who find themselves in a similar head-scratching quandary.

Sorry, but I believe you are confusing pc and cc messages. Selecting a patch is done by sending the corresponding pc#. 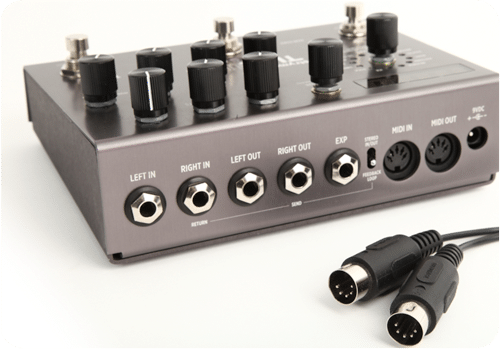 Using a MIDI Controller with Your Strymon Pedals - Part 1

Control the pedals from an external MIDI controller that is programmed to send MIDI messages that can change presets and control parameters on the pedal from the controller.

Since pc# only range from 0 to 127 you’ll have to switch ‘midi banks’ via an msb (most significant byte) message, to switch to a patch above 128. That’s sometimes a cc message with cc# 0 and a cc value between 0 and 127 to specify the ‘bank’. These banks are only related to the pc mapping and don’t necessary reflect the numbers of your devices banks/patches.

Hi, and thanks again for taking the time to assist–sincerely!!!

Trust me, I have read practically everything printed on this topic over the last few days, including both of Strymon’s MIDI posts–repeatedly. Once I figured out how the presets/patches were compartmentalized in “Midi Patch Banks,” (and that was my primary source of confusion) I understood I needed to send PC messages to access those I wanted to access and/or save. I tested that “theory” and it works. (My error if I communicated "CC"messages for this purpose.)

You have piqued my interest, however, in something I might be missing.

“…you’ll have to switch ‘midi banks’ via an msb (most significant byte) message, to switch to a patch above 128”

Huh? I didn’t know that was possible and it has sent me scurrying for what an “MSB” message is and why I would need to break the 127 ceiling. Interesting.