Set toggle for preset not working on Thermae

For some unknown reason, I seem to be unable to toggle a preset on and off, with the Thermae. (Using Mc6)
It works fne and dandy with all of my other CBA pedals (Mood, Dark World, Brothers).
I’m having to do this… 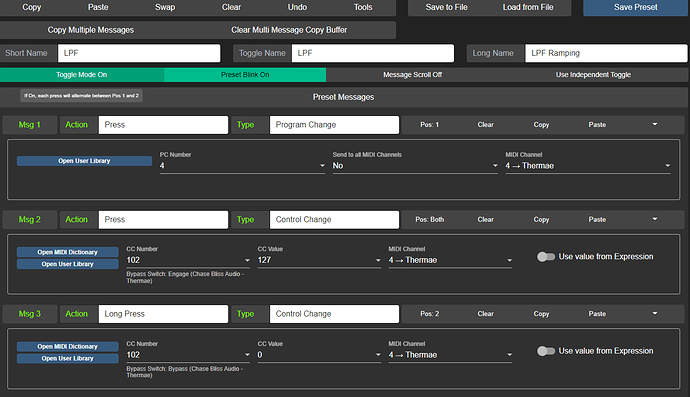 Have you tried using the Toggle Preset message with the appropriate action instead of Toggle Mode?

I don’t really get what you are aming at.
Pressing once, will recall the preset and engage it. The preset is then set to position 2. If you want to disengage the preset with a long press in position 2, it won’t work because you have MSG2 set to ‘press’ and ‘both’! Because of that the MC first recognizes the ‘press’ action and switches back to position 1. Since you have MSG3 set to ‘position 2’ the action does not trigger.
I’d try to set MSG2 either to ‘on release’ or to ‘position 1’
Hope that helps, I’m really not sure about what you trying to do.

All I am trying to do is toggle presets for Thermae on and off with the same footswitch.

What I’m saying is… this works fine for all my other CBA pedals, except Thermae.

Im just wondering if Joel and crew have changed anything.
(They have done this to the Mood)

No, I will try that. Cheers.

Interesting, it should not XD. If it’s working, though, I’d suggest to have a look at the midi monitor to figure out which messages are actually send by the MC. This might shed some light on what is going on. Would you mind to share your results? I’m just curious. Maybe I’m wrong about how the MC works.