Scroll through PC changes and activate with another button

I have set my mc3 setup to scroll up and down PC changes. It works great.
What I would like is to do is scroll up and down
But not to activate a program change until
I hit button c.
For example I’m in patch 1 on my boss, but I won’t to scroll to patch 15 and have it
Ready but not activated until I operate a button c.
ATM I have pc scroll with each button set to increase and send or decrease and send.

I see you can have just increase or decrease and no send, when I arrive at the PC number I want I would like to activate it with another button. How do I do this?
Thanks

There is an ‘engage preset’ command to activate other presets. Programm switch C with ‘engage preset’ and for example ‘double tap’ preset A. Then programm preset A to send the current pc of the counter on double tap. Of the top of my head I think it’s either ‘scroll type’ ‘send only’ or ‘update’.

Yeah I found those command functions.
When I set up buttons A&B to ascend and send
Or descend and send it works instantly
So I changed it from to ascend/descend without “send”
And tried to set up button “c” as engage preset,
But it didn’t show anything in midi monitor
It like nothing had been sent.
Your on the right path to what I want to do

You can use the PC Number scroll message type.

To scroll through the counter value without sending: 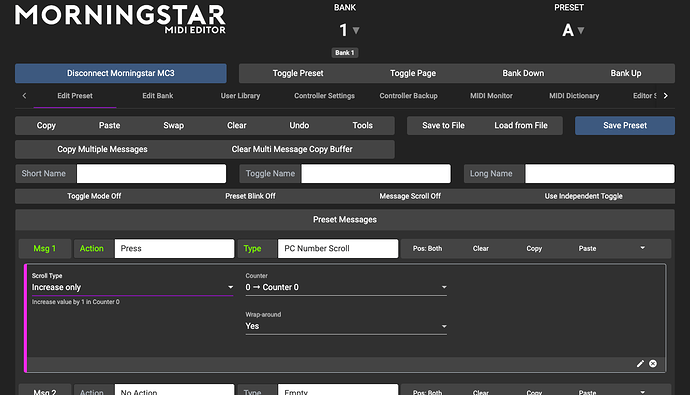 To send the current counter value as a PC message:

Make sure to map ‘send only’ to a different action than ‘increase only’. For example 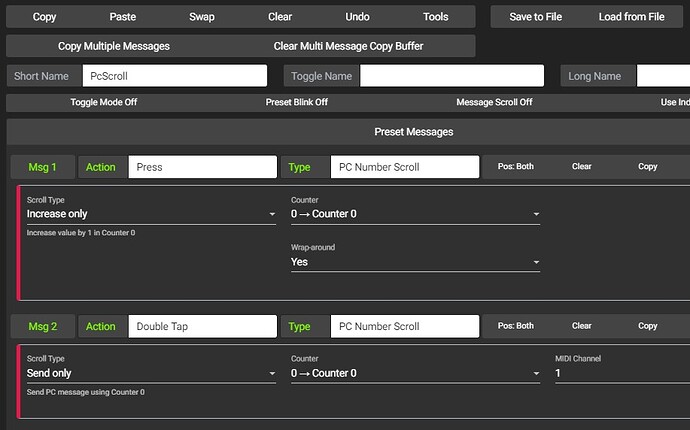 I think you have to activate/turn on the “Message Scroll”. Don’t use the “PC message scroll” as it will activate the patch and that’s not what you want.
With Message scroll, you’ll have to individually tell the controller which PC you want to scroll through. You can add up to 16 of these messages. Then use button C to send a CC msg to engage/bypass your pedal.
I found this was an easier way to avoid activation of a preset by way of PC number scroll.

So the MC3 will Scroll up and down and give me a display offset to match my program
MC1 Counter 1 = Boss Program 1 code was %F0 = offset by 1
I only needed to display the counter once in button A as it always displays the counter number.
I hope that makes sense I’m not very good at explaining myself

Can’t see anything really XD. But I’m guessing you just set up C with a pc number scroll and send only? That makes so much more sense than what I’ve suggested. Thanks, might be useful to know.

The photo I sent was wrong for the A button
Single press worked and increase by 1.
I fixed the second part so long press = scroll