The Preset Message Scroll is such a great way to make a custom sequence, but it looks like it can only Increment Up through the sequence. Any chance there is a way to Decrement? This is why:

I’d like to use a switch to represent a sequence of changes in a Song in defined order, but I may accidentally hit the switch twice incrementing 1 step beyond where I intend it to be. That’s a real problem for a stage show and would throw me into chaos.

I figure, if I can hold the switch and have it go back down 1 message, or some way to do that, it would be a safety net. Ideally, I’d have 2 switches, one for Up and one for Down, but I understand if that breaks the paradigm of how Preset Message Scroll is implemented, so the ability to hold the switch and go back down would be the next best thing.

+1
This would be very useful!

It would indeed. For example, Long Press Release changing direction (and triggering the next +/- scroll at the same time I guess?!) and thereafter Release scrolls in the newly set direction. For mega bonus points, a new placeholder that can be added to the label to indicate direction

EDIT: To expand on actions

I like that too. A kind of shift state for Message Scroll. It really only matters to me that there be some way to decrement.

That’s something we can explore, maybe as a message type. The current message scroll feature is kinda, in my opinion, not very well implemented into the current architecture. We sort of just made it fit into what a Preset currently is.

There is one idea we want to implement which is different preset modes. So the current Preset that you are familiar with is the standard mode, then there’ll be a scroll mode. In the scroll mode, we plan to limit the number of messages to 8, so we can have an additional 6 character name for each message (for the MC3/6/8) so you can get a better indication on what is being sent. No work done on this yet - still in the ideation stage.

Great, good to know this is on the table.

8 Messages would too little for me much of the time. Message name, though beneficial, isn’t as critical as running low on message count. Perhaps an option for those who need the maximum message count?

Can you use the current Message Scroll mode in combination with the Engage Preset message type to scroll through a custom defined list of Presets one at a time? I haven’t looked at doing that, I figured this feature was for jumping to a new Preset/Bank, but if possible to use Engage Preset while also staying in the Scroll context, it solves a couple additional requirements. 1) The presets have a name that can be displayed for each step. 2) Each Preset is potentially another list of 16 commands so steps can effectively send more than 1 message at a time.

Also, while I love to think about new modes of work to come, do you see a way to implement the Decrement with the current mode without it getting in the way of future plans? That’s really the sticking point at the preset time.

Message scroll has another aspect that may be enhanced, as it‘s halfway there, but would need a small modification, if that‘s technically possible.

Let‘s say a preset is programmed as follows:

What is happening at the moment:
As toggle mode is not engaged, hitting the preset switch won‘t change the toggle state. The release action is scrolling thru all messages BUT ONLY those messages in Pos 1 get executed.
Now when the toggle state of the preset gets changed from within a different preset using the SET TOGGLE message, hitting the preset switch from now only the messages in Pos 2 get executed - Wow!

So a preset can have to sets of messages and only those in Pos 1 or those in Pos 2 get executed, while scrolling thru them depending whether the preset is in toggle position 1 or 2.

BUT even if only say messages in Pos 1 get executed at the moment, still the preset switch has to be released for every message, whether it‘s being executed or not, meaning there‘s release actions with nothing happening, until you get to the messages in the correct Pos 1 (or Pos 2)

What could you do with this, here‘s some ideas:

Lot’s of great stuff happening in the beta, thanks!

I don’t know if this is already possible, but can you add a command type in a Message Scrolling preset that would be a pointer to a different preset in another bank of the MC? In theory, it would execute the other preset, but the user would still stay within the Message Scrolling context of the original preset that pointed to it, and the user could continue scrolling to the next message.

That way you have 16 Messages to scroll, but each scroll step could potentially execute up to 16 Messages. Maybe you could also display the name of the preset that was executed as the current “step name”? Then you won’t have to try adding space for a name in each step.

This would practically give an MC the same ability as the Liquid Foot’s “Song Mode”. 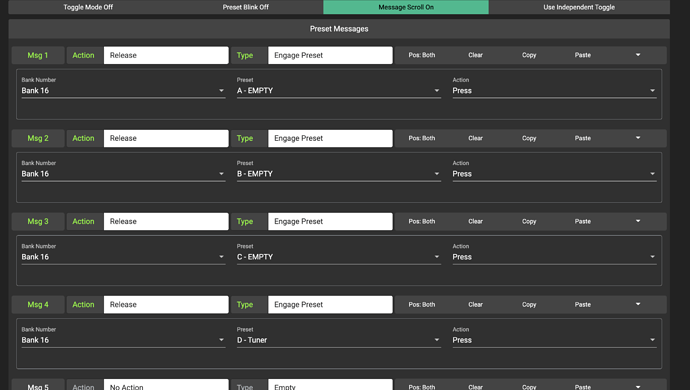 Thanks, that looks exactly what I’m asking for. I have to upgrade my MC6 and dive in.