I am in the midst of my first setup of the MC6 (MkII) controller with my board (Preamp MkII, Walrus M1/D1/R1 being controlled) and have encountered a problem that I have been unable to find a solution for so far.

On the Preamp MkII, I would like to setup a Press function (one switch for up, one for down) to allow scrolling between presets on the pedal where the scrolling starts from the current preset/PC position. For example, if I am on a preset in Bank 1, position 5; when I press the scroll up switch I intend to move to Bank 1, position 6 and so on, up and down. Currently, I have only been able to have the first press of an up or down PC Number Scroll or PC Scroll Up/Down, it advances to the lowest number in the counter before beginning to scroll up or down, and then it keeps its place, even when a PC message is sent to move to another preset. For example, if I am on Bank 1, position 5 and I press the assigned PC scroll switch, it will first advance to the lowest number in the counter, and then proceed to allow up and down scrolling.

Is it possible to have the scrolling begin from the current PC position on the pedal? I imagine it as a PC+1/PC-1 kind of message, but there doesn’t seem to be a way to set that up?

Happy to provide any additional information or a more detailed description.

Edit: Wanted to add that in the CBA midi deep dive video on youtube, Joel shows this action happening with an MC6 MkI, so it seems like it should be possible?

You could set the start value to your favourite Preamp preset, so with every power up it‘ll start there. Also add a long press scroll message to the MC for up and down, let‘s you scroll very quickly while resting your foot on the switch.

edit: Yes it works, see screenshot attached. (Don’t mind that the Scroll counter Number and Midi channel are both number 2 in my example, they have nothing to do with each other, I just like to keep things tidy as I’m controlling 12 MIDI pedals with my MC8.)

Just wanted to post here an example of my page that is scrolling thru the presets of the Preamp MKII in case you were interested.

Buttons B (PcDnSd) and F (PcUpSd) scroll up/dn while sending the PC at the same time thus changing presets. Buttons D (PcDn) and H (PcUp) just scroll the counter, the PC has to be sent then by button G (PC send).

I use this to jump to desired presets on the Preamp and use the same page layout to save presets on my other CBA pedals which have no preset display. You know, you dial in a sound, then you move the counter with D or H to the slot you wish to save it in. Hold both switches on the CBA pedal and hit G (PC Send) to send the PC and save in that slot. 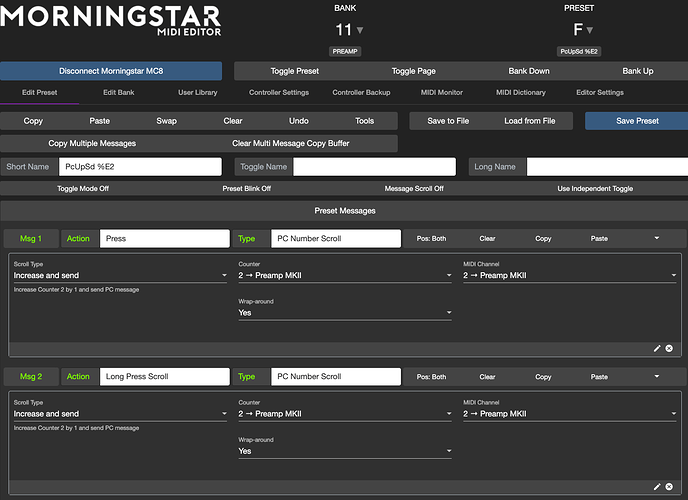 Thank you for this thoughtful approach! I think your suggestion will work for me!

The real world scenario is that I have songs where I want to toggle between drive presets; first part of song is clean preamp, then a solo with an overdrive setting, then a gated fuzz part, then back to the clean setting. So for instance, PC 4 is clean, then PC 5 is OD, then PC 6 is gated fuzz; so I send a PC change to the Preamp MkII and the Walrus pedals for PC 4, the I only want to adjust the PC on the Preamp MkII from there using the Up/Down assigned switches.

I will try this out tonight when I get home and report back. Thanks again!

UPDATE: @kyuss the suggestion worked a treat! Now if I could just get these Walrus pedals to accept CC first time every time

Wow this is awesome. Just commenting for later reference.

I see this thread is quite old but it circled around an issue I am facing… I just want to scroll preamp MKII presets - it is that simple. Just scroll using my MC8. I need to put the MKII under a riser on my board and thus can’t reach the preset button. This seems like such a simple problem… but after a few hours I have not been able to work it out. Any help would be appreciated.

One problem remains. It appears as thought PC scroll down and up retain their “count” (the current number of the internal variable) so that we you switch from one MKII Bank to another, you end up going to the first preset in that BANK (e.g., 0, 10, or 20)… BUT the first time you press scroll switch on MC8 - you jump to the “count” plus or minus one… not from BANK 0, 10, or 20…

A small but noticeable annoyance - if anyone has a way to reset the SLOT value (which is where I assume the count resides)… let me know.

Hope this helps someone. 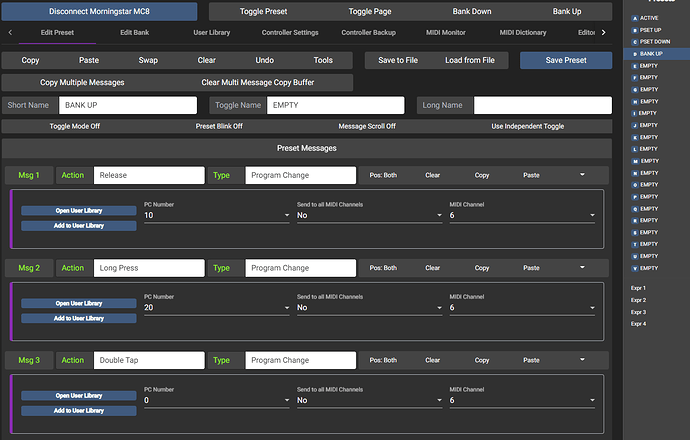 That has a function to allow reset of scroll counter, so you could trigger that with a bank enter message, for example. Plus, PC Number Scroll lets you use placeholders to display the counter number on the MC which is useful.