Old dog new tricks. I really could use some help getting started

Hope everyone’s having a good week so far.

So as the title and my username says, I really don’t know what I’m doing. I understand the general concepts of MIDI but I just can’t seem to wrap my head around some of the MC concepts.

So as an example if I wanted to engage a pedal by selecting the press action/stepping on the switch and then disengage the same pedal by stepping on the same switch I noticed the manual says that it will read all actions simultaneously.

And let’s say I have a pedal set to switch A I’m guessing anything that has a press action will be activated.

Is there a way where I can set it up to use the same action types without affecting everything else that has the same switch action?

And if anyone has the time or doesn’t mind, could anyone maybe give a quick overview of how to set up switch actions and I guess what are the best practices.

I’m sorry for this really basic question but I swear I’ve been reading up on this for 2 days straight and I’m not smart and I’m having trouble understanding the vocabulary in the manual, etc.

Any help would be greatly appreciated.

Highly recommend checking out all of Morningstar’s videos on youtube (here) for the basics and editor tricks! Sounds like you are looking for the Toggle Mode. Directly below the Short Name you’ll turn Toggle Mode to On. Then, to the right of Type (are you sending a PC, CC etc) click “Pos:Both” and you’ll cycle the toggle states.
With Toggle Mode On, anything set to “Pos: 1” will be sent the first click and the next click will send anything set to “Pos: 2”
Depending on what you’re sending you may not need Toggle Mode (some pedals have a set command that will turn on/off the pedal so you could just have the one message without Toggle Mode.

Thanks for the feedback. I watched the videos but maybe I wasn’t paying attention enough.

Am I getting it right or at least close lol.

Thanks again. I think what you wrote will make it easier for me to get things up and running

Here is a simple example how to engage and disengage a pedal by using a CC command.

Let’s say your Reverb is on MIDI channel 1 and can be engaged and disengaged by CC# 27 and you want to engage and disengage it by pressing Switch A on the MC. 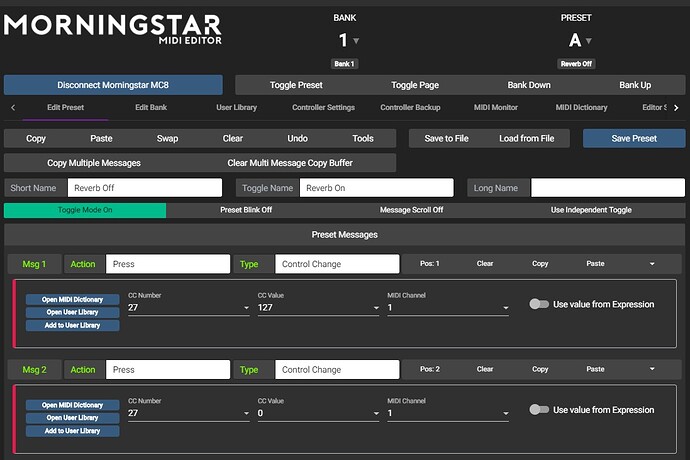 If you leave the position at both ( ‘Pos: Both’ ) every time you press switch A, anything that you have programmed will be executed, regardless if you have set ‘Toggle Mode’ to on or off.

If you have set ‘Toggle Mode’ to off, the preset will stay in ‘position 1’ , so anything that’s programmed to ‘position 2’ can’t be executed.

You can send multiple messages to different pedals at the same time, just make sure that every pedal is on it’s own MIDI channel.
You might also want to execute different actions with the same switch of the MC, that’s what the other action types like ‘release’ or ‘long press’ are for.

Thank you so much man. That’s exactly what was tripping me up. I was getting confused on how to use the switches and actions on a single preset and reading the manual it states all actions that are the same will be executed.

So if you don’t mind me clarifying for my own sake, if I don’t want other presets or whatever to be activated I need to use toggle mode and set the initial action to pos 1 and the second action to pos 2(with the proper midi channel and info).

The only time I’ve ever used midi is with ableton and either their push controller or with the keystep pro which are plug and play or super easy to use with the midi map function in ableton.

I bought this knowing there was going to be a pretty decent sized learning curve but I think the vocabulary tied to the functionality was throwing me for a loop.

Someone sent me one of their json files so I could load it into the MC so I could see what it looks like in the editor. Definitely helped.

So by using toggle mode and different switch positions thid will allow me to set it up so the engage, disengage, etc messages won’t get sent for every action that’s the same type.

Thank you so much. I’ve been staring at that editor for the past 3 days and reading and watching everything I could but I just couldn’t wrap my head around it. I think little pieces of advice/help like this is starting to help me understand the different workflows you can setup

Awesome stuff. And again thank you so much for taking your time to write all thst out and fir the screenshot.

No problem,
a quick note:
Some action types like ‘press’ and ‘long press’ are a bit messy. If you combine a long press and a press action in one preset the press action will be executed before the long press action. To avoid this you should use ‘release’ instead of ‘press’, that way the mc is able to tell the difference between both actions.

Also, keep in mind that ANY action will toggle the position of the preset if you are in toggle mode. To avoid this you should keep toggle mode off and use the message type ‘Toggle Preset’ (can be found under ‘Device’ in the dropdown menu of ‘Type’) combined with the action you want to toggle the preset with.

Thanks again for the info. What you’re describing is the part I couldn’t understand. You definitely helped to clear up a ton. I think with your input and info I’m beginning to understand how the switch functions work. Really big help seriously.

I think this is one of those things that seem complicated at first (specially without any midi knowledge) but learning the little things like you mentioned things start to become a lot more intuitive or understandable.

I really do appreciate your help. You definitely saved me from sitting in front of my computer for another 3 days again lol.