Hey folks,
I have a preset that uses sort of a nested toggle structure.
I have a Phase 45/90 patch on my C4. The patch is set up with a 1 stage phaser, no feedback, on processor 1, and a two stage, with feedback, on processor 2. I have a knob set to pan between processor one and two, and ive mapped cc 21 to the pan. On the MC6, a press action toggles the patch on and off, while a double tap release toggles between the two processors (Pos.1, Cc 21, 0, Pos.2, Cc 21, 127). Works a treat to quickly switch between a mild phaser, and gooey. Also have the Master Depth on an expression pedal.
Question for the group:
When I double tap, it clears the toggle name, and returns to the preset name, even though the preset is still toggled (i.e., the C4 is still engaged). By itself this is not a big deal, BUT, to bypass the C4, I do need to press twice (once to re-engage the toggle, then again to bypass).
I’ve tried adding a set toggle message to the double tap message group, to no avail. Also tried a toggle preset message. Curious if there’s another way I’m missing.
I’ll post a screeshot/json when I’m back in front of the computer… 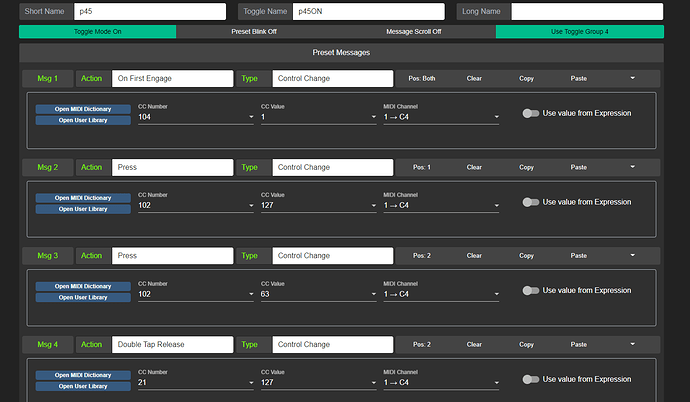 Behavior occurs when disconnected from the Editor.

Also, just noticed, the double tap release toggle only works when the C4 is engaged. Midi Monitor shows the CC# as sent, so I assume this is a limitation of the C4.

Thanks again for looking!

I double tap, it clears the toggle name, and returns to the preset name, even though the preset is still toggled (i.e., the C4 is still engaged).

Sounds like you just want the preset to toggle when you do a press action only. Is that right? If so, you can just turn off Toggle Mode (if in toggle mode, the preset toggles as long as a messages is executed, regardless of action), and then use a “Toggle Preset” message paired with Press action, so the preset only toggles with a press action. 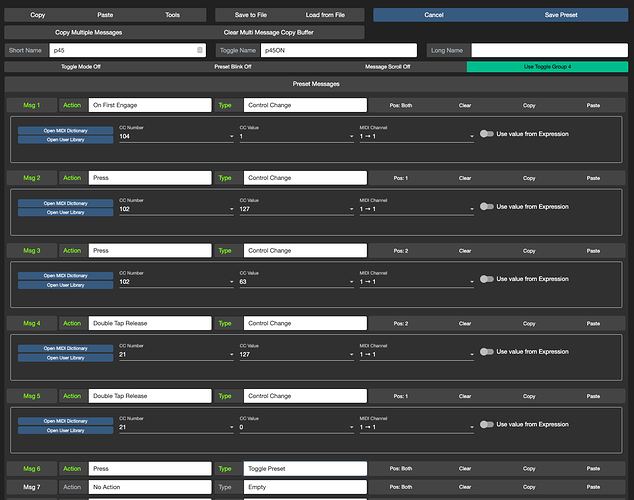 I wondered why you would have a toggle mode switch; now I understand. So much to learn with this controller.

This works to display what I 'd like, but, the double tap release doesn’t toggle, i.e., MC6 will send CC21, 127, with each double tap. It does not send a CC21, 0, on each successive tap. Less of an issue, as I am less likely to switch back to the mild phaser, and it is nice to be able to quickly bump up to the P90 sound.

Wondering if I can use a CC value Scroll to bounce between the two values?
Edit: Nope, that doesn’t do what I thought. Though, I do have some ideas for that function now