I’m currently using an MC8 to control my pedalboard but I’m running into a problem. I’m currently trying to turn on the OD2 side of my Jackson Optimist and El Capistan while simultaneously turning off my Walrus Audio M1 and D1 but every time I assign it to one footswitch, only my Strymon comes on and only my D1 turns off. I’ve gone through and tested each CC message individually and toggled them on and off and everything works as it should, but when I put these 4 CC messages on a single switch it just doesn’t work. Am I doing something wrong?

Have you got separate midi channels set up for each pedal?

Or is your midi set up in a loop between all pedals? You might have to make sure the strymon has midi thru selected?

It’s possible that one of your pedals can’t handle the input that quickly. I’d try to add a delay between messages, or pair two messages with a press and the other two with a release action

Replying to both of your responses here.

Thank you so much for the suggestions, it’s nice to have a starting point!

Interesting, hadn’t thought about that but I guess that could be a problem. I’m about to try what you suggested and I’ll post my results after. Thank you!!!

It’s weird, I redid assignments and put the M1 and D1 on a press and the El Cap and Optimist on release and now its taking multiple presses of my A button to get all the messages to come through.

Suggest posting a screenshot of your preset here? Sounds like there might be a problem with how the actions etc are set. 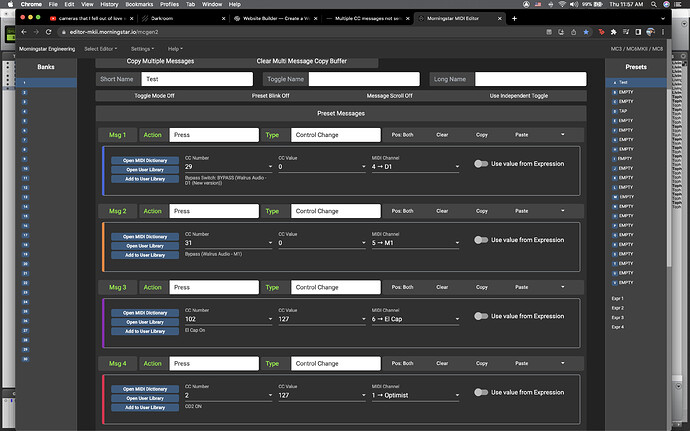 Here’s what I’m trying to do! I went back to leaving everything on the initial press action because it seemed to be the most consistent way it “worked” for me. The issue now is that I press once and the D1 turns off, then I press it again and the M1 turns off, then i press two more times and the el Cap and Optimist come on together.

That looks right. Do you see all of the expected CC messages showing on one “block” in MIDI monitor when you press? If so, then the MC is ok and something’s stopping the pedals receiving as expected. Maybe try adding a delay between messages as suggested earlier. 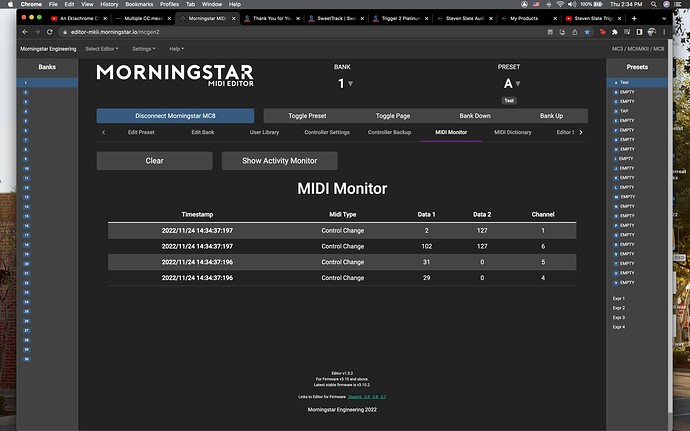 This is what it looks like in the Midi Monitor when I press the footswitch.

Okay… that proves that the MC is sending the expected MIDI in the sequence expected. So, it must be a problem with the MIDI getting to the pedals as expected. Try adding a delay message between the existing messages and see if that improves things. If not, it’s likely a cabling thing I would guess…