HI guys - I’m trying to use my brand new MC3 to control a number of functions on a fractal audio FM3. Primarily CC toggles with a short press, and single CC message with a long press.

What am i doing wrong? 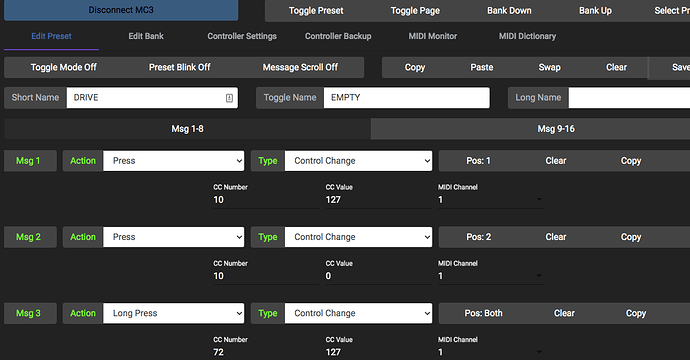 You’ll need to turn the “Toggle Mode” to ON.

Thanks James, that seems to work ok. I have a switch programmed for toggle mode to turn one effect on/off. 2 messages, one for on, one for off.

Now, I’d to add a function for a long press on the same switch, to send a single CC, with NO toggle mode. (ie, same CC on every long press). Is that possible?

To achieve that you would press the button to turn Toggle Mode Off…
Then add a Release Action for Toggle Preset (Pos: Both). When using the Toggle Mode button, it will change to the other position every time you engage the preset…using the Toggle Preset action instead lets you be more specific with how it is changed.
You should change your Press actions to Release actions. The reason being is that the Long Press action will register and execute the Press actions at first when the button goes down before it sees you holding it down for a Long Press.

Ah gotcha - release seems to be the trick!

You never know when someone might find and appreciate the bread crumbs of knowledge you leave behind. I only wish they weren’t so hard to find and didn’t involve hours of recasting phrases for search engines and hitting one dead end after another.

Thanks for this. There is NO WAY someone could have “trialed and errored” themselves to this solution. I only wish I knew where the original source midi trove is hidden, because the hunt and peck method is frustrating and exhausting.