I attempted a firmware update on my MacBook Pro M1. The MC6 has all blocks one the homepage and won’t factory reset. I tried holding the D+F buttons down on startup and it is completely frozen. Any suggestions? Picture attached. Thanks 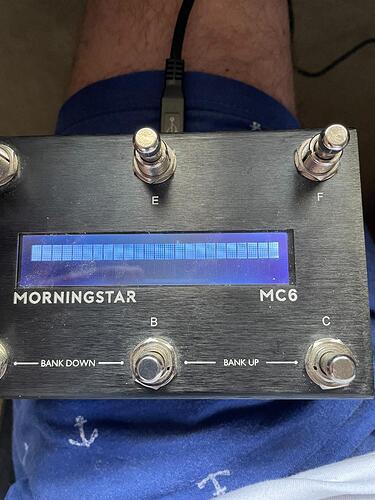 TonyMan,
Thanks for trying to help out. I tried this on my MacBook Pro without success. I tried everything. However, when I tried this on my Windows PC, it worked. My Mac has the new M1 silicon chip, I’m wondering if there is a compatibility issue here. I know there are some issues with plugins in my DAW. Anyway, thanks for the help.

Did you manage to resolve this on your Windows PC? So the MC can boot up now?

We just got an M1 MBP in office. Many other users are using the M1 Macbooks as well - we’ll do some tests soon. What DAW are you using that you are having issues with?

James
I had to use the Windows PC to install the firmware update, and then I was able to use my M1 with the desktop editor. I was unable to complete the firmware update and reset with my M1 MBP.
Regarding the plugins - I use ProTools and Logic. There are some plugins that require you to use a program called Rosetta to use the plug in on an M1. I don’t remember which ones specifically. I haven’t had any issues with PT or Logic, it was just a couple of the plug ins.