How do I make this layout work on the MC8?

Hello there!
I’ve been wondering for a long time now if I should buy the MC8 or not. Now that the units are back in stock I’ve decided it’s time.
I’ve been scratching my head figuring how exactly to do what I want it to do, I come from really big midi controllers that let me choose between a lot of songs, a lot of presets per song and a lot of IA for controlling he On/Off state of each effect per song.

So, after watching a lot of videos and looking at the manual so far this is what I have in mind:
The MC8 has 30 banks, 60 really if you take into account the 2nd page. I would use each bank as a song and each preset within each bank as a part of a song. Normally I use between 8 and 6 parts per song. That would give me 60 songs, the thing is that I play in 3 bands plus my studio work, and each artist has between 20 and 30 songs in their catalog, so I guess I really need to make this as compact as possible to make it work. Or, hoping that maybe Morningstar would make more banks available in the near future! Sure, I could dump the data of each artist on my computer and upload it for each gig, but I would prefer not.

The MC8 will be controlling a Boss GT1000 Core, I will be using each preset of the Boss for a song, but the idea is to control the different On/Off state of each of the 24 effects on the GT Core as each of the 8 different song parts I use.
My idea is to load a bank on the MC8 and with each switch (preset) control via the 16 messages available on both units the On/Off State of each effect of the selected preset on the GT Core, I know that’s doable so no problems with that. I will be using also a 3 button footswitch to bank up/down and toggle between page 1/2
But what I also want to do is to be able to have direct access to each effect (or at least my main 8, 1 per switch) in each song in case I want to change something on the fly, but without sacrificing a preset or another bank on the MC8, due to the fact that I will be using all of them for songs only. Is it possible? If not, what would be the best way to achieve this or something similar without sacrificing banks on the unit.
I don’t have the MC8 yet, so that’s why I’m asking.

I’ve included a reference photo of what I want each bank to do just in case. 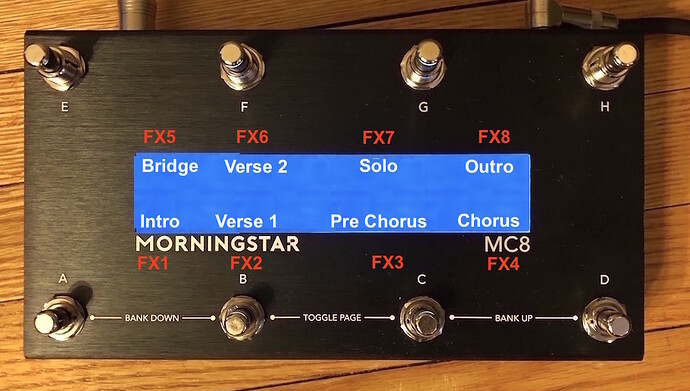 For that set up, you could have a single Press action of a footswitch to select the part of the song and then assign FX activations to something like a Long Press or Double Tap action.

It takes a while to figure out your workflow and it’ll probably change a lot as you learn what you can do with it.
I use the first 9 banks of mine set up by music genres (Blues, Country, Disco, Classic Rock, Soft Rock, Metal, etc.) and have effect presets set up that match that style. I have the last several banks set up as menu type banks for offering more preset selection options for my effects and Kemper…using Bank Jump commands to get to them and then back to my main genre banks.