Continuing the conversation from this thread as to not derail it any further:

Very powerefull this Global toggle. It will be very usefull when we need several banks to control the same device.

Sounds useful the more I think of it. I’ve got a working version for the MC6 for this features and it works nicely. Will just need some time to style the editor properly before releasing an update. And probably think of better names for these options. 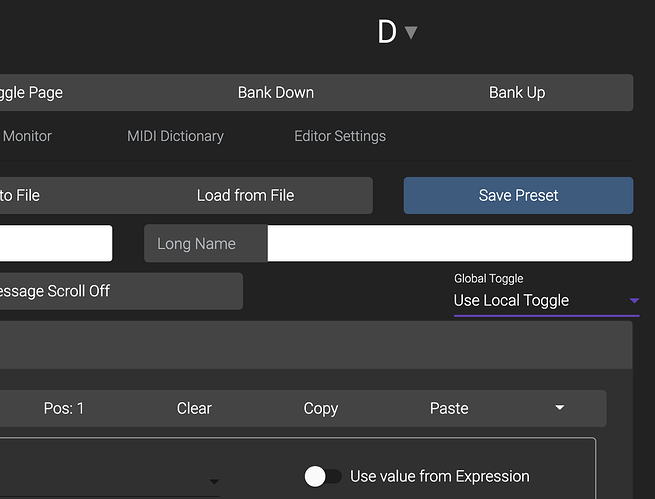 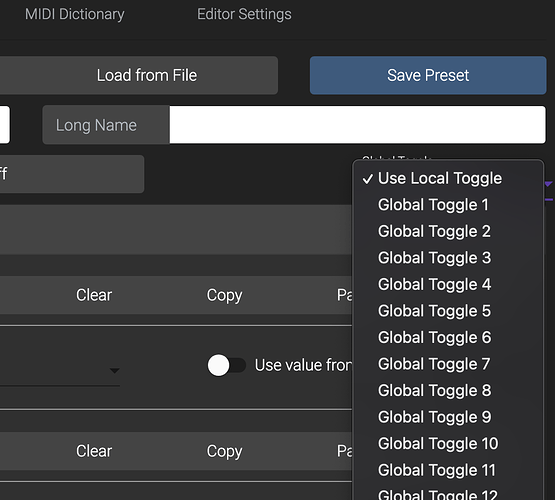 Oh this is gonna be so awesome! This, coupled with some copy/pasting, effectively gives us Global Presets! 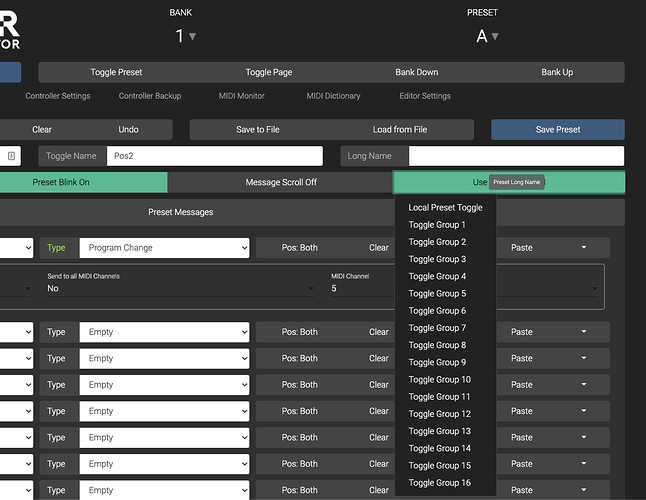 If anyone manages to give it a go, do let me know how it works for you, thanks!

Ok, so it looks like in the above scenario you need to have your Set Toggle message after any Engage Preset messages of the same Action, or it doesn’t seem to like it.

Awesome new feature! Will give it a go this weekend

I plan to use it to have global presets for each ML5 loop. If I understand the write-up right, you could set this up to have the toggle state always correctly represent the ML5 state, even after bank switch.

Great, could we have an indicator saying that this editor area is a select list ?

I seem to get my MC8 to freeze when I use this. I have a button on one bank that simply calls a preset on another bank. The second bank preset turns on / off a source audio pedal. Both are set to a global toggle. Pressing the button that has all the commands worjks on and off. Using the button that calls the button seems to freeze. Although I note that the same thing works on every button bar button P which is where it freezes.

the only difference between the ones that work and the ones that freezes is the freezer has a set toggle command, it doesn’t use the default set toggle mode option (because there is a double tap option also on that specific button)

Thanks for reporting this. I didn’t see your data dump file in Github. Can you can attach it here so I can try to replicate the issue?

I attached it to the response previously, didn’t put it in GitHub . . .

Thanks! We’re busy refactoring some stuff but will look into this early next week

Played my first gig with the new beta 3.9 features (mostly Global Toggle, some Engage Preset Q-V and Shift+), and they all worked great!

Right now it doesn’t seem to work, but is it possible in the future to include Shift status in the Global Toggle?

How would that work? So when you shift a preset that is in a global toggle group, every preset there will shift as well?

That would be great for my usage, but I can only speak for myself.

Right now it doesn’t seem to work, but is it possible in the future to include Shift status in the Global Toggle?

I just came here to request the same.

How would that work? So when you shift a preset that is in a global toggle group, every preset there will shift as well?

Yeah, I guess this is the million dollar question. Could it work If the drop down list were like below???