Hey all. I have a Walrus M1 that I’ve integrated into my pedalboard and control with my MC8. Before I go hog-wild setting MIDI commands up, I’ve been trying to cover the basics: turning the unit on & off and selecting certain presets.

I can’t figure out how to make this work as it should: every button press turns the unit on or off. Please help!

Suggest posting a screenshot of your preset and/or export the preset as json and attach here!

Thanks. I’ll do that next chance I get.

Also if there’s a link to / screenshot of the available MIDI commands on the walrus post that too (though, guess it might be in the midi dictionary, haven’t checked!)

Also, lots of previous posts on Mako, maybe worth a read if you haven’t already?

Alright - I figured out the on/off issue. It had to do with the toggle setting for the ‘press’ action not being assigned to the correct positions 1 and 2. Doh!

So now I can turn the unit on & off as desired, however, my next challenge is controlling the effect speed with my expression pedal. I have an expression pedal connected to EXP 3 omniport (with the omniport correctly configured). Here’s a screenshot of the setup for Expression 3. 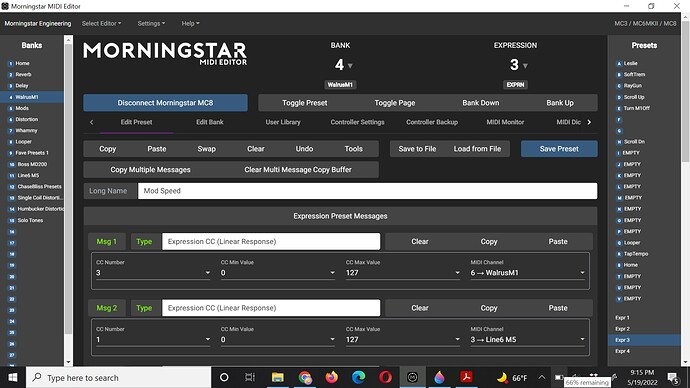 CC Number 3 controls the pedal’s RATE (ie speed) parameter so when I move the pedal up & down, it should adjust the effect speed. Unfortunately it doesn’t.

I also have the MC8 sending MIDI clock to all my units via tap tempo. Is it possible that this is overriding the expression commands? If so, how do I prioritize the Exp over the tap tempo clock? 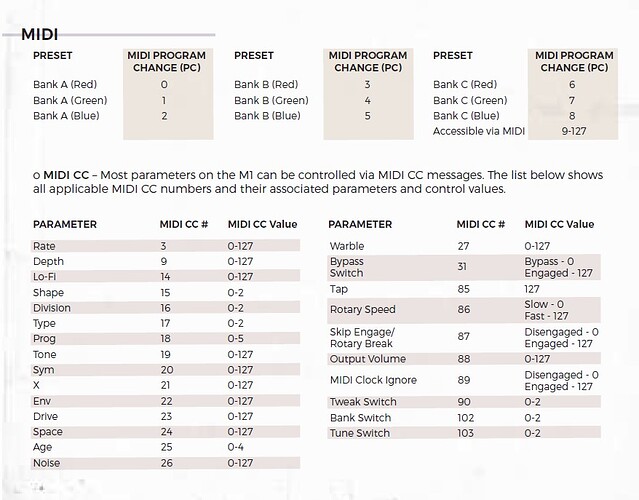 It’s possible to turn off ‘Midi clock persistent’ in the general settings of the MC.

To actually use an Exp preset within a footswitch preset, add a msg that selects the expression preset, action Press, position 1. If you want to deselect that Exp preset then you could add another msg, Press position 2, to deselect Exp preset(s)

If I turn off “persistent,” does that mean that the MIDI clock only sends time data when I change the tap tempo?

PS - I originally set the expression pedal’s messaging up exactly as shown in this video: Using an Expression Pedal together with MIDI - Morningstar MIDI Controller - YouTube

It will stop sending midi clock, if you select a different preset.