Thanks in advance for the help!

Yes, I recently used my MC8 to do this exact setup for the Timeline looper. Just use the CC message codes in the timeline manual to setup the functions you mentioned. Works great.

Edit: I haven’t programmed the fade out yet, but that seems like a cool idea too.

I never used the TL Looper but since I got the MC8, I’m really enjoying it!
Everything you’re asking for is possible!

I programmed a bank only for the looper. Whenever I enter the bank, the MC8 switches to Looper Mode.
There I have buttons for Record / Play / Stop / Undo / Reverse / Vol 80% / Fade Out.

The Fade Out can be achieved with the Waveform Generator. I programmed a Sawtooth Down with 0 & 127 in the Controller Settings. In the preset setting you choose:
Type → CC Waveform Generator
Start
Engine 1 (or the engine you programmed in the Controller settings)
Only Once
CC Number 98 (Looper Level)
2 Cylces (I chose a fade out of ca. 30 seconds)

I’m trying to automate a fadeout on the TL looper as well. I followed what you wrote out, but nothing seems to be happening. Any chance I could ask you to elaborate on the instructions you wrote out? 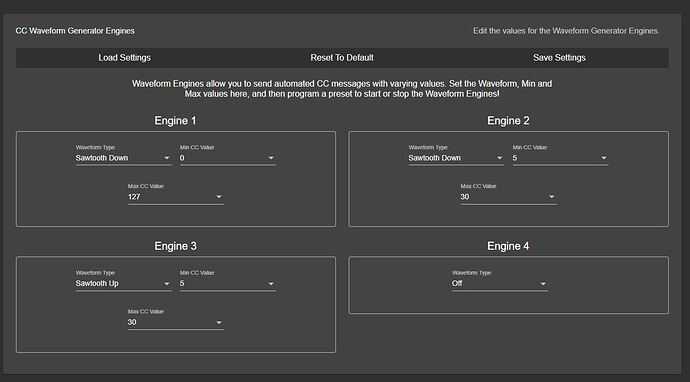 Thanks, I really appreciate you posting this!

I was able to get it to work finally. But I’m getting a strong ticking sound (clock noise?) which increases as the looper fades out.

I think I might figure a way to use an expression pedal instead of trying to automate.

All the same, thanks again for posting!

Ok, that’s strange since I don’t face this issue.
Do you have midi clock activated and/or using this engine in another preset?

Is it just me or is there no way to send a CC message to engage the TimeLine’s looper function? It’s a bit annoying if so - it would be great to hit a preset on the MC6 to kick in the looper but I can’t find a way. Anyone? Thanks!

There isn’t a CC to switch the Timeline into the Looper mode (if that is what you are asking). I’ve not tested this, but on the Timeline itself, you need to hold the Tap switch to access the Looper. So maybe you can try emulating the switch using CC messages. 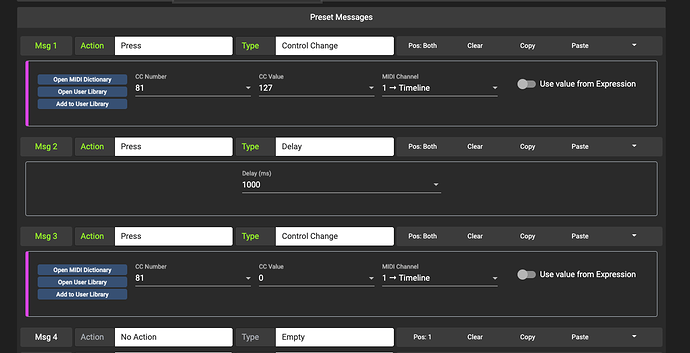 Nice, that seems to work - I want the looper to come on as I enter a dedicated bank so I tried applying these commands to the bank settings as ‘on enter’ and it seems to be getting towards a fix. I’ll keep at it. Thanks for the quick reply!

is there a command to exit the strymon looper?