Hi, I was reading this tutorial and there is an option that is mentioned that would save me, but i just can’t find it on the editor: the waveform generator “cycle length in ms”. Instead i only have the “cycles per minute” option which does not allow a very fast controller move; to the best means a ramp around 420ms long.

My goal is to activate with the MC6 mkII a VCA with a CC (0-127) but with a fast ramp, like a slew limiter, to avoid clicks. And being able to have a ramp with a length within 20ms would be optimal.

It seems that the picture on this tutorial page is from a former firmware version of MC.

SO … is this option gone ? Or did my slow brain just miss something ?

Meanwhile i have a workaround by setting the tempo sync and a 16th note value but it’s not the best.

Thanks for your help ! 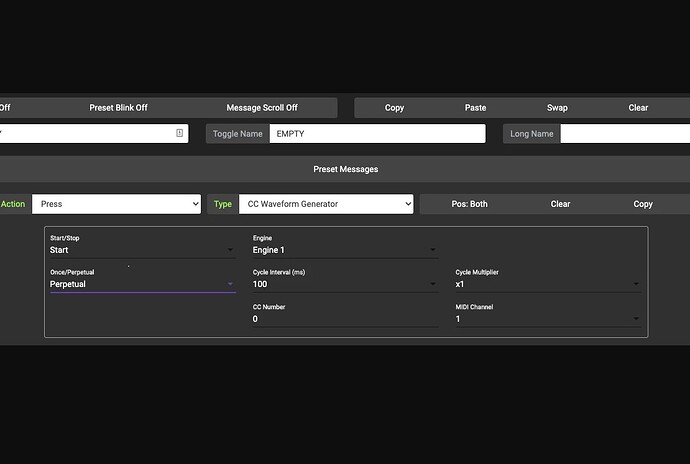 Just to add, 20ms is really short tho. You might get the same effect just programming 2 CC messages to be sent on a press and release i.e send CC value 0 on press and then CC value 127 on release.

Thank you so much !

… and pardon a newbie’s ignorance, i somehow didn’t know about the possibility of delaying messages.

So, i couldn’t use the release solution because i need it for sending the CC back to zero.
And my problem with 50-ish ms was that i sometimes would tap the switch so swiftly that the release message was ignored because the CC wave or the CC sequence were not done yet.

So, yes, your second solution, two messages with a delay, allows me to do spikes in the audio without any click.

What would i do without the MC6 mkII ??