Blink on when changing banks

Still getting my head around this fabulous bit of gear (MC8) although things still baffle me, hopefully you can follow

Can you share a screenshot of the editor for both Preset H? I can set it up in my controller to test

Hi James, thanks for getting back to me. It’s just a simple bank jump preset, I’ve attached a picture of one of the jumps but its just one line. The other is the same but takes me back to the mobius

I have ‘save preset toggle’ on in the controller setting and I would just like it to jump to the relevant bank (chase bliss/mobius) and display the last preset, but not jump bank preset h

It works if I use the bank up/down double button option and perhaps that is the only solution.

What a brilliant product by the way, makes multi effects and the chase bliss automatone much more usable 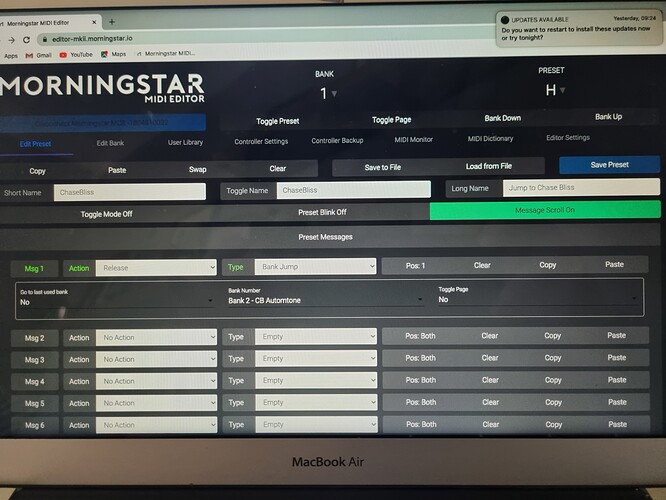 Not sure if I was having the same issue, but you can deselect the Toggle Mode and then assign an action to toggle preset. This allowed me to toggle the preset with my normal action and NOT toggle the preset when using my long press action for bank jumps. Let me know if that doesn’t make sense. Not in front of my controller but can send an example of my preset later tonight.

Also it took me way too long to realize there’s a setting in the Global Settings (on the controller, not the editor) called “RmbTog” that keeps a preset toggle in the state you left it between bank jumps.

That may be exactly what I’m looking for, thanks very much

I think I already had these setting on, they are called something different in the MC8.

This hasn’t solved it, when I use long press release to change banks using button H, it still sees that as the last used preset when I go back.

It works perfectly if I use the standard A+B or C+D to change banks, the presets are still blinking but not when I assign a single button to jump banks

I may be misunderstanding what you want. Are you using the Clear Toggles setting in Bank Settings (Resets all toggles when another preset is engaged)? This is different from the [SvePstTg] (MC8 and MC6 are differently named like you said) in the global settings.
Am I correct in understanding you want to “release” H to jump back to the first bank but have the previous preset still engaged? But the controller is seeing your H “release” (bank jump) as the last preset instead of the preset you were using on said page?

For example if I use a preset in bank 1 which is my mobius, so say a chorus (which blinks when selected).
I then want to use a jump button to take me to bank 2, chase bliss preamp and select an option like a fuzz.
If I then jump back to bank 1 I want the chorus preset to be still blinking. Similarly if I jump back to bank two I want the fuzz preset to still be blinking.
It obviously recognises my jump button as the last preset
It works with the double buttons but that’s a bit too imprecise at times

Thanks for your patience, you’re a star

Are you using the bank setting for Clear Toggles (this resets toggle states when you press another preset so only one preset is toggled ever at a time)? That may be the issue. Unless my understanding of the controller is off (about the clear toggle), I’ll do some testing after work.

Yes I’m using that and that works within each page, so on the mobius I can select rotary which blinks, if I then select chorus that blinks and rotary doesn’t - great

It’s when I use preset H to move banks, the MC8 sees that as the last preset and cancels the chorus blink. The effect is still active it just doesn’t blink when I jump back

Sounds like this is over my head then. Possibly something @james could chime in on. Seems like all the action types are tied to the Clear Toggles under bank settings.

Share a screenshot of your chorus effect preset and I can try and see a work around.
At first thought though, you could potentially add an action on every preset (except H) with a “Set Toggle” to disengage all other presets. Sort of program a manual “Clear Preset Toggles” into each button to fit your need.
I didn’t test this out yet but in theory might work for ya